Richard of Shiring, known commonly as Richard of Kingsbridge (Knightsbridge in the novel) was a character that appeared in Pillars of the Earth, and was mentioned in World Without End, He was the only son of Earl Bartholomew of Shiring, and brother to Aliena, and was forced to witness his sister's rape at a young age by the hand of William Hamleigh. This, and William's role in dispossessing his father of his lands, created a vicious rivalry between them that lasts throughout the events of the book. It becomes one of the key backstories in the book, and is mainly seen through the eyes of Aliena and William.

Richard was the second child, and only son of Bartholomew, Earl of Shiring. He grew up in Earlscastle where he was taught the skills that he would need to become Earl. He shared a close relationship with his sister, Aliena, who he called 'Allie', though she did occassionally have to teach him ideals such as fair play, for example during games when he tried to break the rules.

Aliena made note that Richard used to ride around, pretending he was on a horse, 'fighting' with the other guards, pretending to be a Knight, but he, in reality, had only just begun to start fighting with a sword and was not very skilled with it, barely knowing how to thrust.

The Pillars of the EarthEdit

Richard is first seen when William Hamleigh comes to Earlcastle, secretly planning to find a way to infiltrate and open its gates. He is playing a game with his sister, and is punished by William after he attempts to cheat against his sister.

Richard is mentioned by Jack when he meets Aliena, but at this time he has no real influence in the conversation, save joining the other children in mocking Jack's naivity in thinking he has no father.

The next time Richard is seen is when Philip unwittingly finds them when waiting for a meeting with Waleran. He promises not to reveal their location to anyone. The action really begins when William enters the castle looking for Aliena. In revenge he maims Richard, who is unable to defend her, and using her brother as leverage, rapes Aliena. This event scarred Richard, and built up the intense hatred he would habour for William in later life.

The two siblings escape the castle, after Aliena finds Father's secret stash, which contains both a fine sword and a knife. Aliena gives Richard the sword, as he has had a year's worth of lessons with it. He is still, however, fairly clumsy when using it. Using William and his manservant, Walter's horses and go onto the road, in an attempt to petition to the King. On the road they are attacked by outlaws. Aliena stabs one and gets Richard to deliver the coup de grace, despite his reluctance, claiming that he needs to learn to toughen up and become a man, otherwise she might as well wear the sword instead of him.

When they do finally arrive in Winchester, where the King is holding court, they instead find their father in jail. Bartholomew makes them swear him an oath; Richard's is to regain to the Earldom, while Aliena's is to help his achieve this destiny in any way she can. From there, the former Earl tells them of a stash of money he has hidden, and after some resourcefulness, they manage to find it.

The siblings then leave the city, on orders from their father, to find Uncle Simon, a relative who they believe could teach Richard the knightly skills he needs to progress in the hierarchy of Medieval England. However he refuses too, as he doesn't have the money to look after them.

The siblings leave the town in despair, but Aliena talks to a local shepard and in a fit of inspiration, agrees to take it to market for him, and pays him a sum of their money taken from their Father's secret stash. From there she explains to the skeptical Richard that they can sell it and make a profit, and from this money, set up a business to support themselves.

By the time of Part III, Richard is training as a Knight in the service of King Stephen. He is next seen when William finds out about his father's death and rushes to the King to ask for leave to bury him. The King mentions disputed succession over the Earldom and Richard hears William complaining and confronts him, to William's obvious alarm and fear.

After that, Richard returns home to Kingsbridge, where Aliena is prospering as a wool merchant. Philip rides with him to Lincoln, when he next goes, as he also needs to see the king. The boys cheer Richard off as many regard him as a hero, due to his presence as a knight and a warrior. On the trip to Lincoln, Philip notes his traits and skills, deciding that he prefers Aliena over Richard.

The two eventually arrive in Lincoln, where Richard easily integrates into the men, joking with Lords and Knights. He takes Philip before King Stephen, who welcomes Richard back happily, as he is a known, and well respected, fighter. Richard introduces the Prior, and takes his leave.

Richard, as an adult is described as handsome, tall and broad shouldered.William says: 'There was confidence, even arrogance in the way he stood.'[1] Overall Richard presents a formidable figure. Richard has blond hair, and appears able to captivate and rally people, a skill he displays during the Battle of LIncoln, when he rallies the townsfolk. His earlobe is scarred as a result of William's attack on him when he was young.

As an adult, Richard is a brilliant warrior and leader. Consistently described as brave by everyone around him, he is also a capable fighter. This is proved when he has to fight William, and two of his knights single handedly at once, in a mill.[2] Richard is also very practical. He orders his men to hunt the fleeing outlaws so that few will be left for another attack and possess a cool head during a crisis. His tactical skills are also very good, a result of talent and experience.

However, Philip notes that he often confuses men under his command by acting a lord, and then a friend, and that he tries to win allies by buying drinks, a needy gesture in his opinion. Richard is also exceptionally selfish and conceited; he often ignores just how important Aliena is to his life, and he holds the quarry despite Philip's need and all the past help the Prior has given him. That said, Richard is loyal in many ways. He fights to defend Kingsbridge and infiltrates Earlscastle in order to find out information about William's attacks, after which he warns the town. He also defends Aliena from rape at the hands of Alfred. After which, he also shows that he has become very callous; he barely even cares that Alfred (admittedly a man who nearly ruined Aliena's life several times). Aliena noted that this may have been a result of how she forced him to kill in the early days of their exile.

He also has other skills, such as carving, being able to carve a small cat for Sally, on her birthday, and he earns the respect of the kids when he manages to bob and apple on the first try. Aliena claims he was always better at games than real life, suggesting that Richard doesn't often take things, except war, seriously.

In the TV series Edit

In the TV series, Richard's role is much the same; he begins as a spoiled and rather stupid young man, but after he is displaced from his position as heir to the Earldom and forced into the life of war he quickly proves himself a formidable warrior and militarist. Richard is brave but selfish (though notably much less than his book counterpart) and seems more devoted to his sister than in the novel.

Major deviations from the Richard of the novel include:

Aliena - Aliena is Richard's sister. They seem to share a very close relationship, but Richard can be mean to his sister, which Aliena is more than capable of handling herself. Richard's love for his sister is displayed on several occasions. One is where he takes a severe beating to try and protect her from William and Walter, which fails. The other is where he protects her, successfully this time, from rape by Alfred's hands.

Richard admires Aliena, calling her 'Allie' and he relies heavily on her. That said, he often takes her for granted and underestimates her abilities. Aliena is the only one who is prepared to stand up to him, but he doesn't always take on her advice.

Their relationship stays the same throughout the novel, though it could be said that Richard possibly grows to respect Aliena a little more, but if so, this is subtle. In reality, little changes between the two siblings.

Earl Bartholomew - Bartholomew is his father. It can be assumed that he always preferred Aliena, though he never neglected Richard, by the way she sits on his right during important events. He praises Richard when he sees him again, and has a high regard for his abilities, as stated by Aliena, when she says that 'there was one thing that Father didn't know. That I [Aliena] would make a much better Earl than Richard.'

William Hamleigh - William is Richard's arch enemy and he swears to kill him. This rivalry begins after William beats Richard and in turn, Bartholomew's son contests his right to the Earldom. Both individuals hate the other with a loathing, but William understands that the power behind his rival is Aliena, which tempers his hatred slightly. Even so, they try and outdo each other on several occasions, and William undoubtably sees Richard as the key to his downfall, because of his claim to the Earldom, though he underestimates him until Richard and Aliena take back Earlscastle. They fight for favour from King Stephen, but Richard gains the upper hand in battle due to his fantastic martial skills and military head. They duel on one occasion, which William demands be done alone so he can kill Richard.

Jack Jackson - Jack, by the end of Part 6, is his brother-in-law.

Richard as a Knight 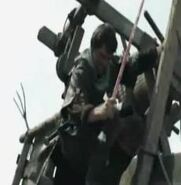 Richard defends Kingsbridge.
Add a photo to this gallery

Retrieved from "https://pillarsoftheearth.fandom.com/wiki/Richard_of_Kingsbridge?oldid=4857"
Community content is available under CC-BY-SA unless otherwise noted.